Katrina and Winter: Partners in Courage

Katrina Simpkins is an All American Hero.  She is a role model to thousands of kids and adults, those with special needs and those without.

(Please see the video of Katrina and Winter at the bottom of this post.)

When Katrina's journey to become a "normal girl" began, she was eight years old, a birth defect survivor of a condition called Proximal femoral focal deficiency and a victim of constant vicious bullying by schoolmates.  Even with her parents' love and support, her life was a misery, and Katrina was depressed and despondent.

Then she met Winter. Winter, the dolphin.  Winter lost her tail to a crab trap and almost died.  Instead, she was rescued by a fisherman named James Savage and taken to the Clearwater Marine Aquarium, where she lives safely and happily today, helping others like her to adjust and ultimately live fulfilling lives.

To that end, I've written the authorized biography of Katrina.  The book, which will be launched within the next month, is called Katrina and Winter:  Partners in Courage, published by Guardian Angel Publishing.

Here is an excerpt:


Hi, I’m Katrina Simpkins and am here to see Winter,” she said to the lady behind the ticket counter.
The woman came around the desk and gave Katrina a hug. “It’s nice to see you again, dear. You’re expected upstairs.”
Katrina grinned and pushed a curl off her face. “Thanks. I’m so excited to be here. See you later.” She walked toward the stairs, the thought of her prosthetic leg struggling up the steps bothering her not a bit.
Katrina put her hands to her mouth when she saw the dolphin. “Winter,” she half whispered. “I’m back.”
“Hey, Katrina,” the trainer called. “Get into a wet suit, and come on in. Our girl’s waiting.”
“Okay,” she said, watching Winter watch her.
After Katrina changed into a wet suit, she lowered herself into the tank and waited. The trainer said, “Here comes Winter. Wow. Does she know you, or what?”
“She’s swimming right into my arms,” a tearful Katrina said. And the young dolphin stayed there while her friend whispered to her and stroked her head. “I’ve missed you so much,” Katrina said softly. 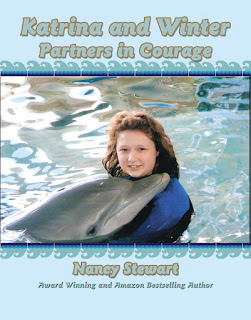 The trainer smiled. “You guys are a lot alike. No wonder you’re such good friends.”
“Video crew’s here!” the grey haired volunteered shouted, breaking the spell.
“I have to go now, but I’ll be back soon,” Katrina told the dolphin. “We’re doing a film together.” I can’t believe any of this is happening, she thought, slowly lifting herself out of the water.
Posted by Unknown at 7:57 AM