The Syrian Crisis is a human disaster of epic proportions.  And, of course, the effect on children is beyond egregious. It has caused some authors to take on the subject for young readers.  Their stories, for he most part, are fiction and highlight the conflict for middle and high school students.

Some of the books address the Islamic State and the ongoing wars between the Shias and Sunnis. The protagonist feature young Muslim refugees and their plight in coping with a war-torn environment.

I have chosen two books to highlight:

Refugee, Alan Gratz’s middle-grade novel focuses on a 12-year-old boy named Mahmoud Bishara.  He and his family flee the violence in Aleppo after his family’s home is destroyed.  They have to contend with smugglers and militants as his family charts a treacherous course through Turkey and across the Mediterranean to Europe. His younger brother, Waleed — based on Omran Daqneesh, the Syrian boy whose shell-shocked photo was seen around the world after the bombing — is too traumatized to even cry. 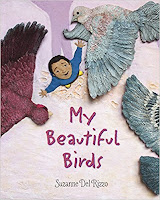 Suzanne Del Rizzo’s picture book My Beautiful Birds is based on an article she read about a Syrian boy living in Jordan in the Zaatari refugee camp. He tamed wild birds. In her book, Sami is a boy who trains pigeons and must leave his birds behind when his family evacuates from their home in Syria and walks to a refugee camp in Jordan. There, he finds solace in caring for wild birds.


Carrie Gelson, an elementary school teacher in Vancouver, read My Beautiful Birds to her class. One student in particular, Nour Alahmad Almahmoud, a 12-year-old Syrian girl whose family came to Canada from a refugee camp in Jordan in late 2015. When the book was read to her, she became overwhelmed and ran outside in tears. In a Skye interview, she said:


I cried because it’s like this book makes me remember everything. I felt like this family in the book is my family.

We, as fellow citizens of this small planet, must care for one another, be respectful of others' differences as well as similarities, and remember that we are on this journey together. Only then can we achieve peace in this world.

Posted by Unknown at 12:03 PM No comments: Links to this post