Walter Elliot, an eighty year-old historian unearthed a forgotten Sherlock Holmes work after it had been in his attic in Selkirk, Scotland for almost fifty years.

Usually people would throw out these books or sell them off. It has been in my family for quite a while now. I have no idea if it has ever been published…I have no idea how many they made and sold.
The book is called "Sherlock Holmes:  Discovering the Border Burghs and, by deduction, the Brig Bazaar. It concerns Watson going on a trip to Selkirk ."I've always been interested in history and my family has always passed on stories and I suppose this was one of the stories that was passed down,” said Elliot.

“I’ve had this book for about 40 or 50 years. I must have got it from a friend because I can’t remember buying it from anyone.”The story in in a 45 page pamphlet and was written in 1904 by Sir Conan Doyle to help raise money to rebuild a wooden bridge that had been flooded in town.I can’t remember how much they raised…they wanted it to be a carriage bridge, but they didn’t get quite enough for that,” Elliot said.  Instead, he added, they built an iron bridge “and it’s still there today."

Just after a new Dr. Seuss book was discovered, historian Walter Elliot claimed he owns a copy of a never-released Sherlock Holmes story by Sir Arthur Conan Doyle. “Sherlock Holmes: Discovering the Border Burghs and, by deduction, the Brig Bazaar” is a 1,300-word short story that Doyle purportedly wrote more than 80 years ago. The booklet holding the story will be on display at the Cross Keys Selkirk Pop-up Community Museum in Selkirk, Scotland, starting Saturday. But while Sherlock fans might rush to see the piece, experts are skeptical that the recently discovered story was actually written by Doyle. (GalleyCat, L.A. Times)
Posted by Unknown at 8:20 AM 1 comment:

Review of Her Pink Hair by Illustrator/Author Jill Dana

A sensitive new children's book about childhood cancer has been written and illustrated by artist/author, Jill Dana and published by Guardian Angel Publishing. 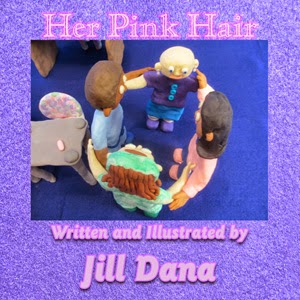 Her Pink Hair is a story about two little girls.  The narrator tells the story of her best friend, Stephanie, who has pink hair.  How did she get pink hair?  Stephanie used to have long brown hair then short brown hair.  But she got sick, was very tired and then she had no hair.

The story's text is lovingly written and easy for young readers of ages five to eight.  The illustrations, created by Ms. Dana are made of mixed media clay, done in a mixture of pastel and somewhat brighter colors.


I would heartily recommend this thoughtful book to parents, librarians, and other caregivers of children.  Her topic is a difficult and important one that is well done.  Ms. Dana has achieved a successful marriage of  reality, appropriate prose, and luscious illustrations. 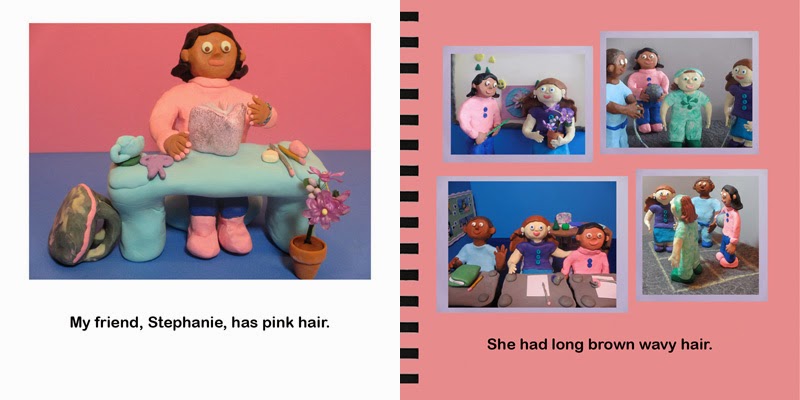 Jill Dana is an author, illustrator, artist, teacher, and
filmmaker. She is a certified elementary educator with a Master of Education from FAU. She is an award-winning filmmaker with an MFA in film and television production from USC. She also studied psychology and motion pictures at the University of Miami. The author will donate a portion of the proceeds from the sale of Her Pink Hair to a children’s charitable organization.

Following the recent discovery of an original manuscript and sketches by beloved children’s author Dr. Seuss, a new book by the late author will be published in July and at least two other titles are planned, publisher Random House announced Wednesday. 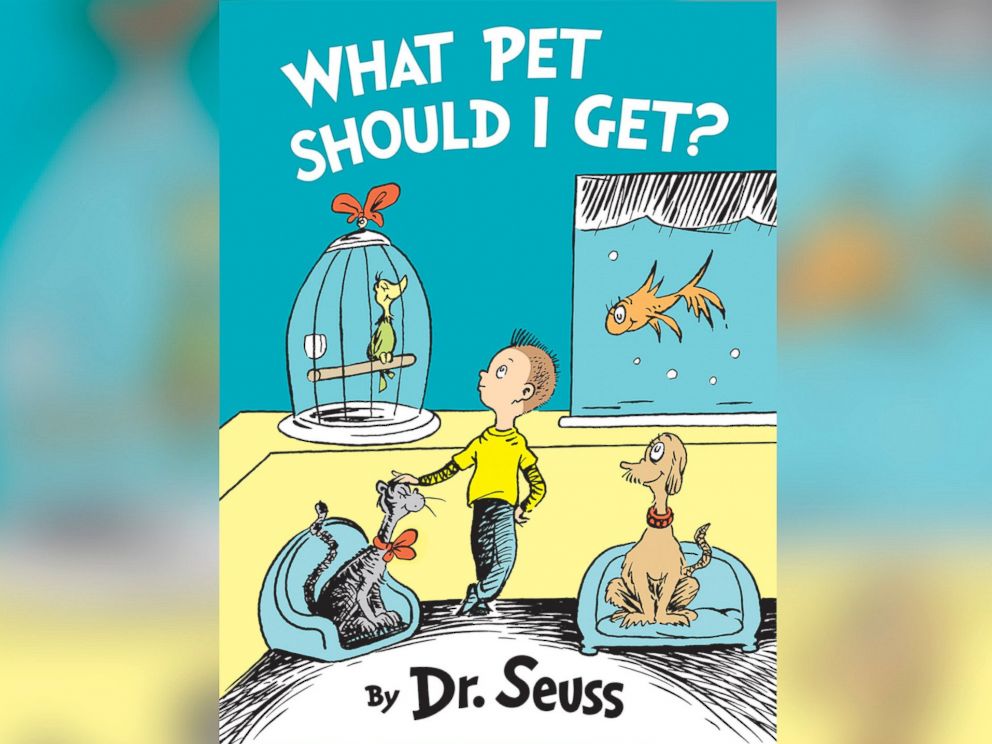 “What Pet Should I Get?” will be published on July 28, nearly 24 years after the author’s death. It will be the 46th book by the man whose publications have sold more than 650 million copies worldwide and appealed to generations.

His books have featured imaginative illustrations of fantasy characters and employed engaging rhyme. According to Random House, the new title will focus on a child's excitement over selecting a pet, and will feature the brother and sister characters introduced in Seuss’ “One Fish Two Fish Red Fish Blue Fish.”

A box filled with pages of text and sketches was found shortly after Geisel’s death when his widow, Audrey Geisel, was remodeling her home, according to Random House. The box was set aside and rediscovered in 2013 by Geisel and Claudia Prescott, Geisel’s longtime secretary and friend, the publisher said.
The text and illustrations for “What Pet Should I Get?” were found nearly complete.
Geisel’s widow called the discovery “undeniably special” but not surprising.

“Ted always worked on multiple projects and started new things all the time -- he was constantly drawing and coming up with ideas for new stories."
Posted by Unknown at 6:48 PM 1 comment:

Young detectives have replaced vampires in young adult fiction according to the organizers of the Waterstones Children's Book Prize in the United Kingdom.

This year's shortlist features six titles where children are left to their own devices to solve mysteries.

The awards, now in its 11th year, includes Erin Lange's Dead Ends and Smart by Kim Slater. Waterstones has seen a "striking resurgence" of children's mystery books, according to Melissa Cox of the book company:

By borrowing from the detective genre, many of our shortlisted authors have allowed their characters to deal with some very serious issues within a framework that also feels safe and familiar for young readers.

Also shortlisted for 2015 is Murder Most Unladylike by Robin Stevens, which features a pair of boarding school girls investigating the violent murder of their teacher, while Smart by Slater follows a misfit teen investigating the death of a homeless man.

The list also includes Harriet Whitehorn's Violet and the Pearl of the Orient, Sarah Moore Fitzgerald's The Apple Tart of Hope and A Boy Called Hope, continuing the theme of crime-solving children.

The prize has three categories: picture books, fiction 5-12, and teen.

Whom among us does not love the irrepressible Peter Pan?  Not many, I'll bet.   Interestingly, the most famous lines of the play were cut during productions of the show during World War I. (The drawings below are copies of original sketches.) For some other intriguing facts, read on:

1. Peter Pan was originally a play. It was later adapted into the 1911 novel Peter and Wendy.The first stage version opened at the Duke of York’s Theatre in London on 27 December 1904. The Guardian gave it a great review: “Even those who least relish it must admit that no such play was ever seen before on any stage. It is absolutely original — the product of a unique imagination.” The play proved so popular, it was re-staged every year for the next 10 years.
2. J.M. Barrie was constantly updating the story. The script was rewritten and changed each year. In that spirit, our version of Peter Pan is set in the late 1950s and early 1960s. It was a time when the very idea of what it was to be young or old was shifting. By transporting the story to a new era, I hope we can take a fresh look at this familiar tale about growing up or staying young forever.

3. Fairy Dust was added later for health and safety reasons. Originally Peter and the Lost Boys could fly unaided, but after several reports of children injuring themselves attempting to fly from their beds, J.M. Barrie added Fairy Dust as a necessary factor for flying.
4. The original productions pioneered new stage effects. In the original stage productions, Tinker Bell was a dot of light that moved about the stage focused by a mirror. In our production Tinker Bell is a beautiful puppet designed by Sue Dacre, a regular puppet maker at Jim Henson. Sue has also made us some spectacular flying puppets, who soar over the audience.

5. The first Wendy house appeared on stage in 1904. J.M. Barrie needed a house that could be built quickly as these lyrics were sang “I wish I had a darling house, The littlest ever seen, with funny little red walls, and roof of mossy green”.
6. Peter Pan didn’t wear all green. That’s partly a Disney invention. In the original stage productions he was said to wear auburns, tans, browns and cobwebs. To keep with time time-period in our version, Peter Pan wears a leather jacket and has a look not too far away from a young James Dean.
7. Captain Hook went to Eton. In the original play, Hook’s last words are “Floreat Etona”, the Eton motto. In a lecture about the character, J.M. Barrie confirmed his attendance at the school. Captain Hook also knew Long John Silver. Despite being in different novels by different authors, it seems that Hook and Silver crossed paths. J.M. Barrie and Treasure Island author Robert Louis Stevenson were contemporaries and knew each other, hence the cross-over.
Posted by Unknown at 3:26 PM 4 comments: