om to read, will run from September 27 through October 3, 2015, and will be observed in libraries, schools, bookstores and other community settings across the nation and the world.
“Young Adult books are challenged more frequently than any other type of book,” said Judith Platt, chair of the Banned Books Week National Committee. “These are the books that speak most immediately to young people, dealing with many of the difficult issues that arise in their own lives, or in the lives of their friends. These are the books that give young readers the ability to safely explore the sometimes scary real world. This Banned Books Week is a call to action, to remind everyone that young people need to be allowed the freedom to read widely, to read books that are relevant for them, and to be able to make their own reading choices.”

In recent years, the majority of the most frequently challenged books in libraries have been Young Adult (YA) titles. Six YA titles were on the list of the Top Ten Most Challenged Books of 2014, according to the American Library Association. Attempted bans on books of all kinds also frequently occur under the guise of protecting younger audiences.
Banned Books Week celebrates the freedom to read by encouraging read-outs, displays, and community activities that raise awareness of the ongoing threat of censorship. Last year, tens of thousands of people participated in Banned Books Week online.  More than 500 videos were posted in a virtual read-out, and thousands participated in hundreds of events in bookstores, libraries, and schools and universities across the country.
Do yourself a freedom favor and read a banned Young Adult book this week!
Here is the ALA's list of frequenlty challenged YA title from the past year:

Posted by Unknown at 8:02 AM No comments:

Hispanic citizens have had a profound impact on the culture of the United States from language to food to weaving their culture into the strength of the melting pot which is our country.  A fine example of this is the children's book, Esperanza Rising by Pam Munoz Ryan.

Americans observe National Hispanic Heritage Month from September 15 to October 15, by celebrating the histories, cultures and contributions of American citizens whose ancestors came from Spain, Mexico, the Caribbean and Central and South America.
The observation started in 1968 as Hispanic Heritage Week under President Lyndon Johnson and was expanded by President Ronald Reagan in 1988 to cover a 30-day period starting on September 15 and ending on October 15. It was enacted into law on August 17, 1988, on the approval of Public Law 100-402.
The day of September 15 is significant because it is the anniversary of independence for Latin American countries Costa Rica, El Salvador, Guatemala, Honduras and Nicaragua. In addition, Mexico and Chile celebrate their independence days on September 16 and September18, respectively. Also, Columbus Day or Día de la Raza, which is October 12, falls within this 30 day period.
Posted by Unknown at 9:09 PM No comments:

Another inspirational children's book from Jill Dana, the first called Her Pink Hair. Both are published by Guardian Angel Publishing. 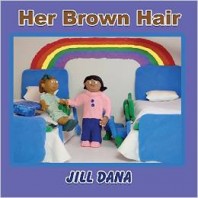 Her Brown Hair is a must-read for kids between the ages of five to eight and is a sensitive look at childhood cancer.  This book concerns two best friends, one with cancer and one without.  It addresses the issues of concern, and sadness, and fear of the unknown, in a gentle and sympathetic way.

The friends are known only as 'she' and 'I," and it works.  While she is in the hospital, her best friend worries and thinks of ways to cheer her up, and I believe to make herself feel better as well.

The illustrations, created by Ms. Dana, are made of mixed media clay, done in a mixture of pastel and somewhat brighter colors. The love and care of the author/illustrator is ever present in the attention to detail in every aspect of the story's pictures. They are simple, yet complete and give a picture of wholeness within the story's context.

Jill Dana is an author, illustrator, artist, teacher, and
filmmaker. She is a certified elementary educator with a Master of Education from FAU. She is an award-winning filmmaker with an MFA in film and television production from USC. She also studied psychology and motion pictures at the University of Miami.  Please visit:

As September is Children's Cancer Month, what better to recognize it than purchasing a copy of this worthwhile book for your young ones.
Posted by Unknown at 2:47 PM 1 comment: