Whoo Knew Owls Would Play Such a Large Part in Children's Literature?

Children's Literature is awash with owls.  From Owl at Home by Arnold Lobel to Harry Potter's loyal Hedwig, owls have appeared regularly in the genre.  The question is why?

I have always felt owls posses a mysterious majesty and believe many people are affected by their presence in the same way.  Within many cultures, owls symbolize strength and wisdom, due in large part to wings that allow soaring, claws that effectively clinch their prey, and laser eyes of field and forest, allowing nothing to go unnoticed.  These are all aspects admired by most children who, by virtue of being young and therefore, powerless, use vicariously.

Let's take a look at some, albeit some of this blogger's favorites, illustrate the love and admiration in kids' hearts for owls.  Owl Babies is a charmer, warm and fuzzy, by Martin Waddell.  These babies are as close as human babies as it gets.  All claws tucked away, this is a dream of a night time read!

Another favorite of mine is The Owl and the Moon, again by Arnold Lobel.  I used to read this book to my boys, and they loved it, the soothing funniness of Owl's reaction to the moon and his environment.  Still a must-read for tucking-in time.

My all-time favorite owl book was written by my friend, Jane Yolan.  Owl Moon not only is a classic in the true sense of the word, it is biographical.  Jane's daughter loved to go owling with her dad, and the story comes directly from those adventures.  A delight for everyone, Owl Moon is a poem to nature, and love, and life.

Maybe there is something in the wisdom of owls.  After all, most cultures that validate these birds believe it to be true.  Or perhaps their most amazing eyes give an expectation of wisdom, all judicial, impartial, unbiased. Perhaps they allow us humans a glimmer into a mysterious world of non-judgmental behavior that makes and keeps kids emotionally whole.   Who knows, but one can hope.
Posted by Unknown at 9:51 AM 2 comments:

Here comes a sequel to Winnie-the-Pooh!  It is being published by Egmont and is an "official sequel" to 2009's  Return to the Hundred Acre Wood, by David Benedictus, itself the first authorized sequel to Milne’s tales.

This edition, an anthology, will coincide with the 90th anniversary of the first Pooh book in October 1926, the adventures of Christopher Robin and Winnie-the-Pooh would be continued by four “outstanding writers with a real understanding for AA Milne’s characters and world”. Out next year, the book will be illustrated by Mark Burgess, who also worked on Benedictus’s sequel.

It appears that the authors' names will be announced closer to publication. We’ve a while to wait until then, so let’s pass the time by speculating about who the best authors writing today would be to pick up Milne’s baton.

'Winnie-the-Pooh' was originally published by Methuen on October 14th, 1926, the verses 'Now We are Six' in 1927, and 'The House at Pooh Corner' in 1928. All these books were illustrated in a beautiful way by E.H. Shepard, which made the books even more magical. The Pooh-books became firm favorites with old and young alike and have been translated into almost every known language.
Posted by Unknown at 11:05 AM No comments:

Samantha Newark
Samantha Newark, the original speaking voice of Jem from the beloved 1980s cartoon series Jem and the Holograms, is lending her voice to raise awareness of a new LGBT-themed children’s book that teaches acceptance.
The actor and recording artist has recorded an audio book to support the Kickstarter campaign for Square Zair Pair, a story set in the magical land of Hanamandoo, occupied by creatures called Zairs. Zairs do everything in pairs — one round and one square. But one day two square Zairs pair for the first time, and their fellow Zairs reject them — until they learn a lesson of acceptance and strength in diversity.
The Kickstarter campaign for the book, written by Jase Peeples (who happens to be The Advocate’s entertainment editor) and illustrated by former Disney artist Christine Knopp, seeks to raise $10,000 in the next month to cover costs of illustration, printing, and shipping for the book’s initial print run. Publication is expected by September.

The audio book by Newark is offered as one of several rewards available to those who back the project.
“The story came to me years ago, after a friend told me he and his husband were having trouble finding many children’s picture books with positive LGBT themes they could share with their daughter,” Peeples says.

“I wanted to help by creating a new, unique tale for families that might be looking for just such stories, and so I sat down to write Square Zair Pair.”
Posted by Unknown at 5:50 PM No comments:

When songwriter Jonathan Coulton's daughter got really into her princess phase, Coulton wanted to be sure she knew she didn't have to behave like some of the princesses she was obsessed with (for example, being super dependent on other people). Coulton told BuzzFeed this was the inspiration behind his song "Princess Who Saved Herself," which was then turned into a lovely comic book.

Coulton teamed up with comics writer Greg Pak and artist Takeshi Miyazawa to make the book become a reality. Pak created a Kickstarter in March asking for $50,000 to print and ship the completed book to anyone who supported the fund. They've since raised $111,759. 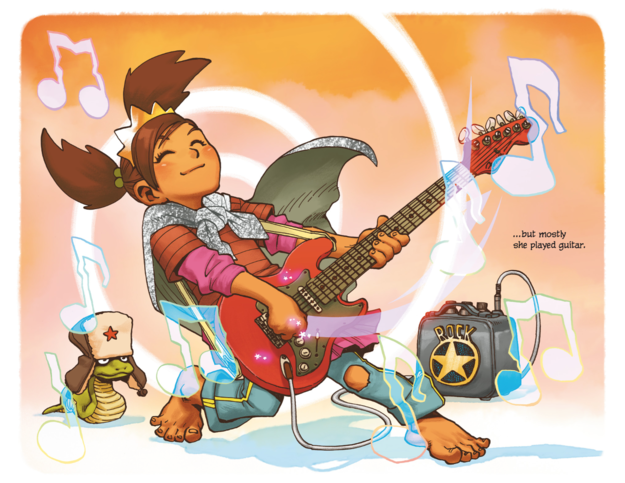 "The Princess Who Saved Herself reinvents the princess myth for a new generation of proactive girls, telling the story of an awesome kid who lives with her pet snake and plays rock 'n' roll all day to the huge annoyance of the classical guitarist witch who lives down the road," the Kickstarter page explains.

Coulton and Pak told BuzzFeed they hope Gloria Cheng Epstein Takahara de la Garza Champion, the protagonist, will be a role model for everyone, not just little girls. "I also love the idea of parents reading this book to their little boys as well. Fiction is one of the best ways for people of different backgrounds to learn how to identify with and empathize with each other," Pak said. 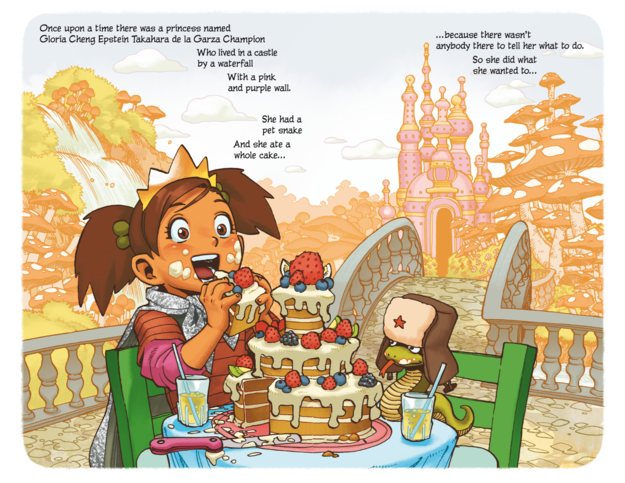 Posted by Unknown at 1:58 PM No comments:

Pinkie McCloud and How She Saved Ballooze by Eileen Goldenberg


Eileen Goldenberg has done it again!  This time she has written and illustrated a gorgeously rich and textured children's book, Pinkie McCloud and How She Saved Ballooze.  A confection of poetry, pictures, and prose, Pinkie's story reads like an allegory that kids will understand and love. 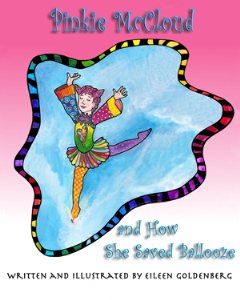 Pinkie is a happy girl who happens to have been born a wingbling, a rarity in the land of New Skyland.  Not only that, Pinkie has pink wings, a double rarity!  In her land, everyone is happy, and contented, and good.  Wingblings especially, are kindhearted, and willing, and able to help others.

Alas, Pinkie is told the grim news that the family must move far away to a place called Balloze.  There are no wingblings in this place, and others make fun of Pinkie and consider her a freak.


When, however, an evil storm rages through Ballooze, the residents think all is lost.  The only one who doesn't is Pinkie.  She knows what to do. She does it and saves not only the day but the entire town!

Kids and their caregiver readers will love the luscious book, illustrated throughout in rich colors--until the storm appears.  With Eileen's dark and ominous illustrations, one can feel--almost taste--the danger at hand.

This is a book that can be read again and again.  The illustrations call for repetition to be sure one captures every aspect of the  fine artwork.

This blogger would urge you adult readers to acquire this idyll of a book not only for your children, but for your selves as well!

Eileen Goldenberg has been a working artist in the Tampa area for over thirty years. Her paintings and other works are widely collected here and elsewhere.  Her paintings on canvas and board have been commissioned by individuals and organizations and have graced book and magazine covers.

Pinkie McCloud can be purchased through the publisher, Guardian Angel Publishing as well as through Amazon and Barnes and Nobel.com.

Eileen's art can be found at:  http://fineartamerica.com/profiles/eileen-goldenberg.html