What a lovely surprise for fans of Maurice Sendak! 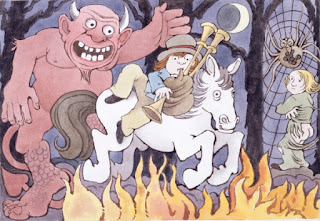 Lynn Caponera, president of the Maurice Sendak Foundation, was going through the late artist’s files last year “to see what could be discarded,” she said. “I was asking myself, do we really need all these?” when she found a typewritten manuscript titled Presto and Zesto in Limboland, co-authored by Sendak and his frequent collaborator, Arthur Yorinks.
Caponera, who managed Sendak’s household for decades, didn’t remember the two friends working on a text with that title, so she scanned the manuscript and e-mailed it to Michael di Capua, Sendak’s longtime editor and publisher.  Of the newly discovered book, he said:
I read it in disbelief.  What a miracle to find this buried treasure in the archives. To think something as good as this has been lying around there gathering dust.
Sendak, considered by many to be the most influential picture book creator of the 20th century, will have another publication in the 21st, five years after his death. PW has the exclusive news that Michael di Capua Books/HarperCollins plans to publish Presto and Zesto in Limboland in fall 2018.
This will be the third book collaboration for Yorinks and Sendak, following The Miami Giant (1995) and Mommy? (2006), which were both also edited by di Capua. In addition to their publishing collaborations, the longtime friends also co-founded the Night Kitchen Theater. The title of the new book references an inside joke between them.