In October, 2017, there will be Good Day, Good Night, a previously unpublished book by Margaret Wise Brown. 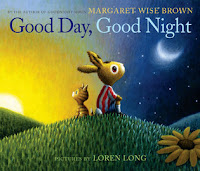 It consists of two fragments written in 1950 and put away after Brown’s sudden death two years later, then combined by an editor a few years ago.  HarperCollins Children’s Books will publish it with original art by the author-illustrator, Loren Long.
Good Day, Good Night is not a sequel to Goodnight Moon, which did not sell well during Brown’s lifetime, finding its extraordinary success only years later. 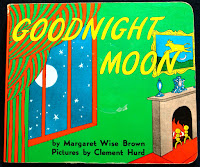 While Goodnight Moon takes place inside a house on a single evening, the new story follows its young-bunny protagonist as he wakes up, goes outside and greets numerous things, then heads back home and bids it all good night.
Good Day, Good Night began in a 1950 letter from Brown to one of her editors that Amy Gary, who wrote a biography of Brown, came across several years ago at the Westerly library. In it, Brown describes plans for a book in which, Ms. Gary said, “the child goes to sleep with the same things they wake up with.” Reading the letter, she continued, enabled her to see the connection between what had seemed to be two separate manuscripts — one about waking and one about going to sleep — in the trunk.
Putting the two parts together required her to do some editing, Ms. Gary said, while keeping in mind Brown’s possible intentions and “trying to remain as true as we could to what she wanted it to be.” As for the title, “I worked with Margaret’s notes and the manuscript to develop” it, she said.
What will you think of the new book, Dear Reader?  Will it live up to Goodnight Moon?  Only time and the reader will judge that.  A few moons from now will more than tell the story!
Posted by Unknown at 3:08 PM